Lloyd was one of Moss's pack members and a friend of Jaguar.

Lloyd is an unknown breed, possibly a mixed breed. His appearance in the manga usually shows him as dark gray with black markings. He has an akita-like tail, and he has a collar, showing his past life as a pet dog. In the anime, however, he looks somewhat Teal and has darker Teal or Black markings, and he still has his collar. In the anime, the insides of his ears are Olive Green-ish. His collar is also brown. In the Manga His eyes are white with small black pupils while in the Anime, he possibly has Dark brown, almost black eyes.

After the traitor Hyena warned his leader about the Ohu soldiers, Lloyd and Jaguar were sent as messengers to tell Ben's pack about the situation between their boss and the Ohu soldiers. After Ben told them his reply, they head back to Moss's territory, but they are ambushed by Hyena and Sniper.

While Hyena faught Jaguar, Sniper leaped into the air and gored Lloyd's head, causing him to die quickly. His body was later found by one of Moss's pack-mates, believing that it was the Ohu soldiers who are guilty for Jaguar and Lloyd's deaths. This was yet the beginning of the battle between Moss and Ben's pack. 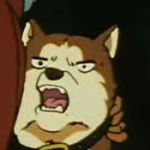 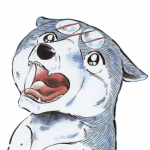